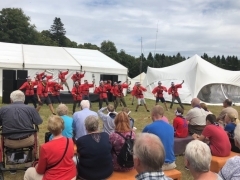 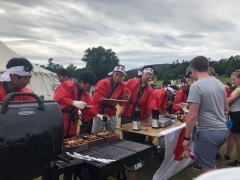 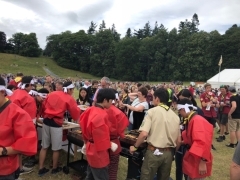 The International Scout Camp event“The Blair Atholl Jamborette” has been taking place from July 16th until July 27th at the Blair Castle camp ground in Perthshire.  This year, in addition to the Scottish Scouts taking part, close to 1,100 Scouts from across 21 different countries have been participating in the cultural exchange through outdoor activities.

Two leaders and 18 Scouts from Iwate prefecture as well as Tokyo are also taking part, and have been able to participate together with Scouts from Scotland and beyond in various activities while using English.
During the Visitor’s Day on the 21st, The Japanese Scouts gave a performance of a traditional festival song and dance; and amongst the comfort-food stalls representing different countries, the Japanese yakitori stall went down a storm.
This year marks the 36th camp, and has taken place once every 2 years since 1946. This year also marks the 14th event Japanese Scouts have participated in, the first being in 1992.

During the Scout leader reception, The World Scout Committee Chairman, Mr Craig Turpie, on behalf of the Scout Association of Japan, presented Mr Callum Farquhar with the Sakura Award. The award acknowledges the mutual understanding and the cultural exchange between Japan and the UK achieved through Mr Farquhar’s hard work within the Scout movement.
Mr Fumiaki Sagisaka from the 5th Morioka Group of the Iwate Scout Council also shared his gratitude for Mr Farquhar, who continues to deepen the cultural exchange between the two countries, and who also helped provide aid to the Scouts affected by the Great East Japan Earthquake in the prefecture.
This reception allowed Scout leaders from all over the world, to come together and strengthen their culturally ties. 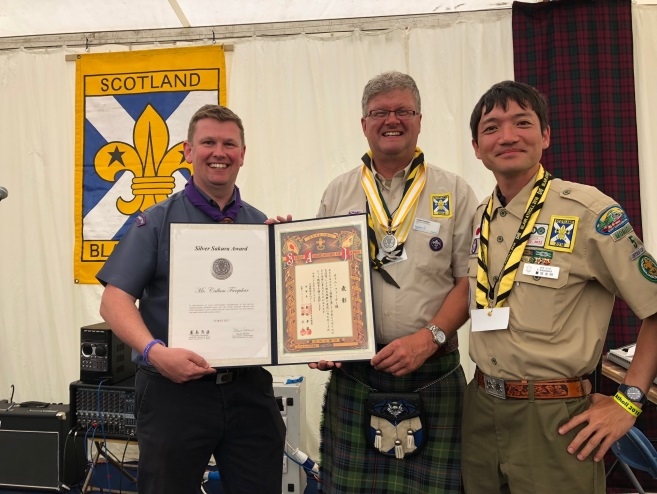