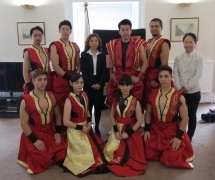 On Monday 13th August the performance group Japan Marvelous Drummers, who are participating for their third time in the Edinburgh Fringe Festival, visited the Consulate.

The Fukuoka based group is made up by Troupe leader Mr. Masaru Nishiguchi along with the other 7 members and focuses on Japanese musical entertainment. The group not only uses Taiko drums, but also other instruments such as Japanese flutes and harp, and tours around Japan and overseas. This year, the group has enlisted performers from Brazil to join the other extraordinary members, in what promises to be their greatest show yet.

Japan Marvelous Drummers will be performing up until the 27th of August at
Venue 8 at Assembly George Square (George Square, EH8 9LH).
For more details click here.

This is a great opportunity to see and hear traditional Japanese music performed live.  If you’re looking for a show to go and see, why not try this one?