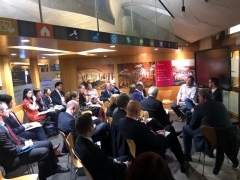 Patrick Hughes from the Scottish Seafood Association reported that exports of seafood to Japan has seen a significant increase and success.
David Whiteford of the Scottish Rugby Union praised the Rugby World Cup for creating opportunities with the Scottish team's official camp city Nagasaki as well as promoting Scottish export products to Japanese consumers.

In his speech, the CG highlighted the success of Scottish salmon’s salmon due to import tariff reductions, as well as the historic contributions of Scotland to the modernisation of Japan and to Japanese culture.