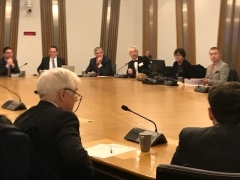 On 22nd January, Consul General Nozomu Takaoka attended the meeting of the Cross Party Group on Japan. The Consul General opened the first meeting of the second year of Reiwa with a speech in which he highlighted developments in the last year including the Rugby World Cup and the visit of Cabinet Secretary Fiona Hyslop to Japan. The prospects of this year’s Tokyo Olympic -Paralympic Games and the COP26 (Conference of the Parties to the UN Framework Convention on Climate Change) in Glasgow were also shared.