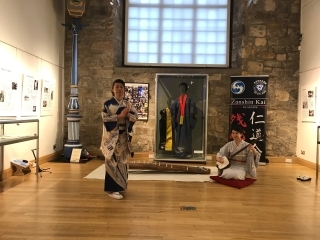 On 22nd February, Consul General and Mrs. Takaoka attended the opening reception for “Love & Whisky – The Story of Rita Cowan and Masataka Taketsuru”, which details the extraordinary love story that marked the beginning of Japanese Whisky. The exhibition has been organised by Ms.  Mari Itoh and is being hosted by the Auld Kirk Museum in Kirkintilloch until 14th March.

The Consul General was joined by Provost Alan Brown, Stuart McDonald MP, and many members of the local community in celebrating the centenary of the marriage of the “Mother and Father of Japanese Whisky” and highlighted the couple’s remarkable achievements that strengthened Japan-Scotland relations in his speech. The event was also accompanied by cultural demonstrations, such as a Shamisen, classical Japanese dance, and martial arts performance, as well as a Japanese Whisky tasting supplied by Nikka – the company that was established by Masataka Taketsuru.