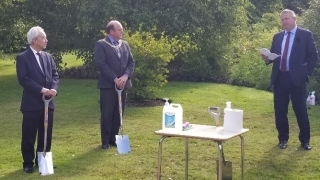 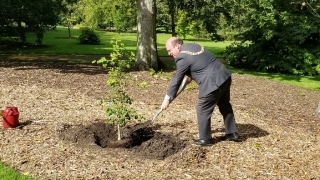 Rt. Hon. Lord Provost of Edinburgh Frank Ross, the Chair of the Board of Trustees at the Royal Botanic Garden, Mr Dominic Fry, and Consul General Nozomu Takaoka, each planted a Ginkgo tree.

Despite the devastation 75 years ago, a ginkgo tree was able to survive the blast, its newly formed buds giving hope to the people of Hiroshima. In 2015 seeds from the very same tree were donated by Hiroshima city to the Royal Botanic Garden to be nurtured until they were able to be planted.

In his address, Consul General Takaoka expressed his gratitude to the Royal Botanic Garden for the growth of Ginkgo, the need for world cooperation in the face of the common threat of the coronavirus, as well as, conveying the message of Prime Minister Shinzo Abe, delivered at the Hiroshima Peace Memorial Park, on the same day in Japan.
For Local news coverage of the event, please click here.

Please enjoy video coverage of the ceremony below, courtesy of the Royal Botanic Garden in Edinburgh.