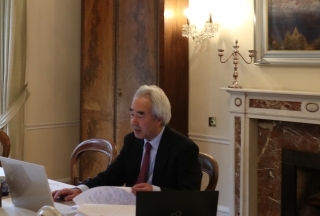 On 17th September, Consul General Nozomu Takaoka attended the 5th Cross-party Group on Japan general meeting via online.
The meeting focused on the UK-Japan Comprehensive Economic Partnership Agreement which was agreed in principle on 11th September.

The Consul General began by explaining that Prime Minister Suga, who took office the day before, had indicated at a press conference that he intends to carry forward the initiatives undertaken by the Abe administration. The Consul General then briefed the members with an outline of this EPA; emphasising how Scottish food industries can especially expect to benefit from the now 70 Global Indications, as well as how the progressive efforts in e-commerce and financial services, will benefit small and medium-sized businesses.

The meetings participants - including those from Chamber of Commerce- expressed great interest in the benefits this trade deal would give to Scottish economy.