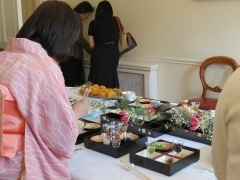 On Thursday 23rd January, a New Year’s reception was held at the Consul General’s official residence, where we welcomed about 60 guests from Scotland and Northeast England.

While celebrating the first New Year’s reception of the Reiwa era, Consul General Nozomu Takaoka reflected on the transition from Heisei to the current era of Reiwa before going on to stress the importance of Japan-UK and Japan-Scotland relations, following Brexit. He also addressed the great success of last year’s Rugby World Cup, his expectations for this year’s Tokyo Olympic – Paralympic Games, as well as the Japan – UK Season of Culture. (The Consul General's speech can be found here). After receiving New Year’s greetings from the president of the Scotland – Japan Chamber of Commerce, Mr Hiroshi Ohashi, and the Kagamiwari (traditional opening of a Sake barrel), the director of the Scotland – Japan Chamber of Commerce and board director of The Scotland Japanese School, Mr Naoki Okusawa, proposed a toast with Japanese Sake.

The guests enjoyed a variety of authentic Japanese dishes that were arranged on the tables and the reception was characterized by a lively atmosphere throughout.